Father Adrian’s Homily for this weekend 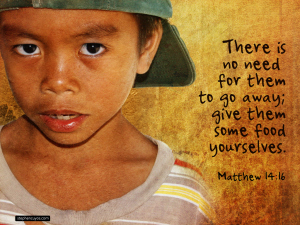 Homily for Mass – Eighteenth Sunday in Ordinary Time (Year A)

A story is told about four men who were adrift on the Atlantic Ocean in a lifeboat, near the equator. There were so thirsty that they were trying to squeeze moisture from the pieces of canvas on their small lifeboat. When rescuers finally arrived, the men were very weak from dehydration. After gradually reviving them, the rescuers informed the men of an incredible irony: All the while they were fighting for a few drops of moisture to drink, they had actually been floating on drinkable water! And that’s because they were near the Amazon River – a river so huge that it pushes fresh water far out into the ocean. The men could have reached down and…